What is special for iCafe compared with other tools for quantifying arteries:

1. Comprehensive features including topology and intensity in each anatomical region of cerebral artery circulation can be extracted.

From the topology perspective, vessel areas need to be segmented first, then convert the vessel areas to tree-like structures. After that, several features can be calculated, such as total voxel of vessels in the brain, length of branches, number of end points in tree, proportion of main branch and small end branch, etc. The richness and intricacy of vessels are essential in evaluating brain health.

From the image intensity perspective, gray scale of each voxel in TOF is related with flow speed of blood according to the MR imaging principle. MR intensity cannot be directly used, as the intensity values do not have a physical meaning. A simple but effective image normalization method (Nyul method) is used to make samples in a dataset to be comparable in intensity. The normalized data is then used in telling relative speed of blood flow compared among patients. Blood flow value is another important index to reflect health of brain vessels.

Vessel aging may appear in different regions of brain on different scales. Intracranial artery tree is divided to have a better understanding of which part of brain vessel is more likely to change during aging. A simple method based on determining "Order" is used to separate vessels into four groups. More complete artery tree division is also available if several bifurcation of interest points are assigned with anatomical labels. Artery definition used in iCafe can be found here.

With all features coming from different grouping methods, a total of 1,456 features can be extracted from each case described in the paper. Actually with further development, we can extract more new features, such as artery density and boundary sharpness. 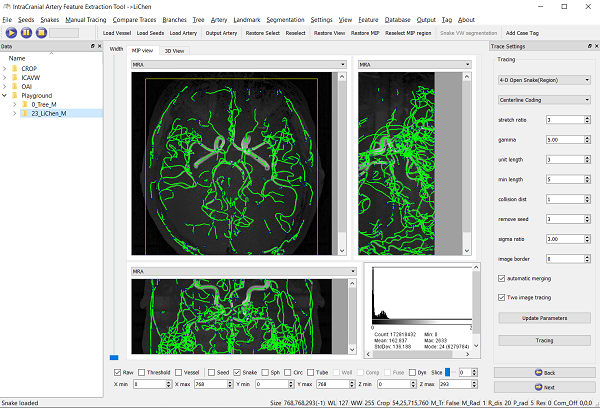 iCafe loaded with my brain MRA scan. Luckily I still have complete Circle of Willis.

2. High accuracy due to the semi-automated processing

The theory behind iCafe is more manual editing to ensure higher review quality.

Using iCafe might be time consuming, but the quality of artery traces can be pretty high, thus the vascular features have good qualities.

From the experiments in the MRM paper, iCafe shows 94% sensitivity and 85% precision in bifurcation detection, 0.328±0.444mm in bifurcation deviations, which is within pixel spacing. The length measurement is close to measurement from Philips workstation, with a correlation coefficient of 0.97.

Meanwhile, the high quality labels can be used as perfect labels for various machine learning projects, such as luminal area segmentation and artery anatomical labeling.

3. Extensible to other artery analysis tasks

iCafe, with its further development, has become a united platform to support multiple artery analysis tasks. Such as multiple view of artery, comparing arteries in multiple time points, visualization of segments predicted with high risk lesions. Enlighted from the iCafe naming, the following up packages are all named after cafe and coffee, like MOCHA, LATTE, FRAPPE. The iCafe family 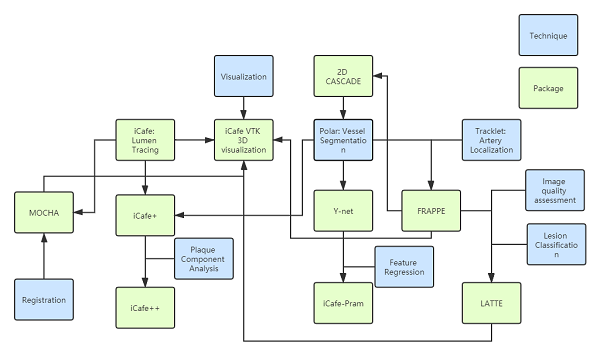 MRA such as 3D TOF is susceptible to noise and flow impacts. Whether the artery structure and intensity information from TOF are reliable for vascular quantification and analysis is unknown. In addition, as a semi-automated tool, its inter-rater reproducibility requires validation. So we have selected subjects with repeated scans within 2 weeks to test the inter-scan, inter and intra operator reproducibility. Details in the MRI paper.

After validation, we can apply iCafe on various medical and clinical problems. The original intention of building iCafe was for the aging project (paper) on analyzing vessel features among a comunity group with various ages. But iCafe is also showing great potentials on more applications with its continuous development, such as finding artery differences in dimentia group, comparing different sequences, observing artery changes before and after treatment.

Monitor change before and after carotid revascularization:

iCafe is currently a research tool for academic uses only. Please contact our lab manager Zach Miller (zach1@uw.edu) Dongxiang Xu (xdx@uw.edu) if you are are interested and planning to use it for academic purpose. Please also attach a brief introduction of your group and what you want to do using iCafe in the email. If you did not hear from them for three business days, please let me know (cluw@uw.edu)

Note that we are not being able to give technical support for iCafe currently. Please read the guide and watch demo video carefully if you want to use it.

You can edit this shared document with track change mode if you find something I have not mentioned. Also welcome your comments, bug reports, feature suggestions, etc in this online document.