This is the first day after the final exam and it happens to be my birthday. To save flight cost, we transfer via Kuala Lumpu and celebrate birthday there. First time spend birthday abroad without parents.

Before we arrive on this mysterious little island of Sri Lanka, we are sure this journey must be different. A socialist country once colonized by Westerners countries for a long time and lies extremely close to India, with 95% people believe in Buddihism and 90% speak English as second(third) language, what that country would be?

When we left the airport, we were quite surprised. Buses running on the streets are so traditional, just like ones in China several decades ago, small grocery stores selling various snacks and daily products remind me of my childhood. When we took a taxi(unauthorized private car) from airport to the hotel, we are greatly welcomed by the driver when he knew we come from China. He pointed outside the window, showing us the elevated road, "This is built by China", in his proficient English. Then we suddenly realized China and Sri Lanka are good comrades in the same ideaology group.

The significant impression of Sri Lanka is its people's hospitality. My immediate relation came in mind is the people in China before the Cultural Revolution nearly half a century ago when people still thought simply and firmly believed in mutual trust. A taste of such pristine culture which is only available in movies and documentary records in China is memorable.

Our first night "hotel" is actually guestrooms of the house owner. The owner is an amiable old man who believes in Christian, whose English is quite fluent. Despite the limited living condition, the service he provided is greater than five star hotel in my eye. In addition to detailed introduction to nearby restaurants and attractions, they provided taxi and train informations we need tomorrow. A free tea in the afternoon let us have a taste of famous Ceylon black tea. Such an afternoon with the house owner is interesting. In the evening, we walked around and accidentally enterred a small town near sea. Villagers are taking a rest after dinner, when we come in, they felt a little surprised, as if there is not many tourists coming there. Little children timidly said hello to us, and dogs kept barking at us strangers. Surprisingly, we even saw fireflies in the town, so real, close and touchable to us, instead of watching them on TV. This reminded me of the advertisement from travel agencies in Thailand, where firefly watching can be a main character in their travel product.

When we bought our breakfast and left a backery, a young man came over, greeting us with handshakes, which we already felt a little astonished. After a brief introduction, he asked me to add him Facebook friend. We were so surprised and even at a loss. Why a complete stranger can be so friendly to us and even asked to add Facebook friend? Born in China, we cannot help to think about the possibility of being cheated or being robbed of mobile phone. But looking at his big pure eyes and his harmless frank smile, we soon feel ashamed of considering that evil idea. Maybe we have already been over-cautious in a society full of machinations and deceptions, even forgeting how to be frank to other people. When all the people here are all armless, why is there any necessity to be cautious? Such a pristine cultural and social environment is so rare in China, what a pity!

We took a car from Negombo to Kandy, its second largest city and old capital. The driver is a voluble and friendly young guy, several years older than us, chatting all the way, on the condition that he did not slept last night driving for money(a little scary, lucky we are safe to the destination) He is remarkaby speaking five languages, all learnt from friends. Using Wechat(a popular social communication app in China) on Galaxy S5, he seems not out of fashion at all. His salary, in our calculation, is profound comparatively in this nation. We added Wechat friends as expected and even now greet each other occasionally.

Fruits here are gorgeous, especially pineapple. Driver stopped near a fruit stall and we were surprised the country lady fruit owner could also be so polite and friendly, with a nice accent of English. A herb garden was also recommended by him to pay a visit, free of charge. The herb gardener even speaks Chinese, although we may understand easier if he could speak English... We took a photo with the driver when we arrived, he even asked to meet us again the day we leave this country in the airport.

We visited the buddha relic tooth palace in Kandy and took a nice and inexpensive meal in "white house" restaurant here. It surprised us that KFC and Pizza Hut can also be found. 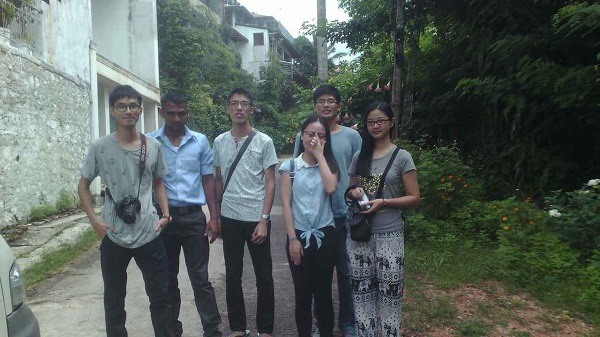 We wanted to have a try to take bus. Less than $1 for a trip more than 4 hours, The trip tested our patience, the destination is not that far, the long time  is mainly  because of the low speed of buses. Nearly all the people on bus is local people, we felt so close to the native people and away from other tourists, which seems a luxury to us, compared with the journey in Thailand. A man talked with us and even offered to give us a ride in the future trip plan. The bus traveled along main roads between two cities. During the drive, we saw not only rural farmers and crops, but also cinema posters of Fast & Furious 7 and Huawei Smartphone shops. This nation is not isolated from outside world, and we can feel the strive to catching the pace of the world.

After the long long journey, we finally arrived at Sigria, the palace on the huge rock. It is very hard to imagine how ingenious ancient people were to build a palace on such a huge rock in such a forest. It is still breathtaking even it became ruin after war, but we were more surprised to know we can climb to the top of it. The climb took us three hours and it was very tiring, but we were constantly surprised by finding animals beside us, lizard, monkeys...We were told monkeys here even robbed food from tourists. Due to the long climb, we missed our lunch, but the arduous journey was worthwhile. When we finally reached top of it, we found quite an amazing view.

By the way, the ticket price for foreigners is $23, but for local people only $0.38, so not many native families went here for sightseeing. 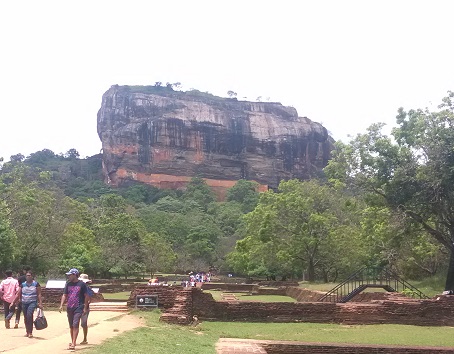 We woke up early to catch the train to Ella, which is said to have one of the most beautiful sceneries in Sri Lanka famous for numerous tea plants on misty mountain areas along the railway. But the reality is, with so many people on the train, we did not even have a seat.

The railway is built during English colonization, and the trains using now are mainly from foreign support(later I found the train is made in China). With no doubt, the train is non comparable to high speed train in China, that is, only 30 km/h, so it took us 6 hours to travel a little more than one hundred kilometers, after standing for 4 hours untill we found seats.

But the scenery really healed our tiredness. The hills covered by green tea trees are surrounded in the hazy mist. Occasionally we could find some farmers peacefully picking tea leaves. Sitting in the train, we felt just like travelling in the heaven.