Thailand, is the common choice when we are planning to go on vacation during week long Chinese New Year and Recess week(a very considerate holiday, hoping the holiday also in China). Nearly 30 of the 40 students who exchanged in NUS from Fudan went there in 5 groups.

Bankok, Chiang Mai and Phuket island are our final destinations in this vacation of our 10 people group. Travelling all by air, 4 flights cost about $400.

Quite different from the situation in our EE major class, the tour groups are never lack of girls, 3 boys 7 girls in our group, and 1 boy 4 girls in another. Coincidentally, we departed at different dates but met in a temple in Bonkok. Below is our photo taken together. 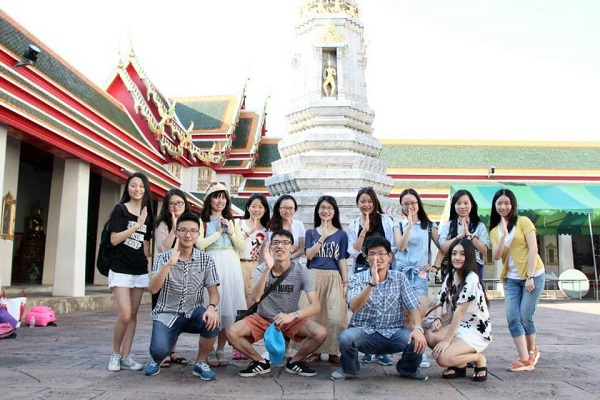 An ancient and peaceful town in northern Thailand famous for its temples and relics. Besides its historical interests, we took one day "Jungle Flying", hanging on a cable travelling across forest, such a memorable experience. 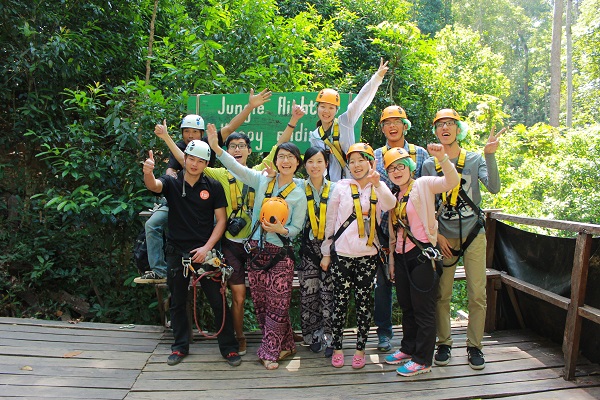 At the end of the journey, we SURVIVED at last

It is hard to say Phuket is the most beautiful sea island I ever met. With its highly developed tourism, Phuket island welcomes holiday-makers from around the world(not many Chinese though, perhaps it is not the summer vacation). There are so many rich westerners here, so there is no surprise the cost of products are somewhat higher than other areas of the country. Cost of two nights at a moderate hotel is equal to the hotel cost of the rest of other days. But its blue sea and beige beach is really relaxing except the buring sun.

However, the Chinese gathered at the boylady show, which is quite well known, at least in China. Out of curiosity, we took a glance, but the show was at fully commercialized running -- boyladies routinely pretending to sing songs, performing licentious interactions with spectators, standing in a line flirtatiously asking tip to be photoed with, meanwhile another pack of tourists waiting outside door-- seeming not a interest to me.

Another new try is my first entering a bar. Night bars are quite popular in Phuket, following by some "experts" in night bar friends, ten of us swarmed into a bar submerged by rock bands music. We were quite embarrased by the menu, not a single cocktail type did most of us know its real content. Needless to say, the bartender became impatient after our googling what to drink for quite a period of time. Blue Hawaii was what I ordered, which turned out to be vodka with pineapple juice. A little sweet but mainly the taste of alcohol. After a cup of cocktail, one of our friend were even drunk. But it was not the alcohol but the increasingly unbearable loud music which drove me crazy(rock music is not quite acceptable to me). 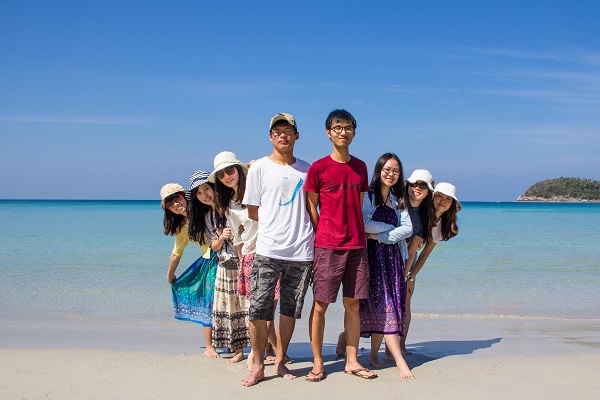 On Patong Beach, our director He posed our location for a set of photo collection

It was quite a hurry to travel every city in less than three days, and the trip was really tiring. We usually woke up early and played till late night, and many times, we delayed our meal because of the unexpected schedule. The three cities we chose is highly representitive, and we took a fast glimpse at its diverse culture in Thailand. Finding fireflies on Mekong River, swimming with colorful fish in the sea, striving for little food when eating with 10 hungry people,etc. these valuable moments are quite memorable .